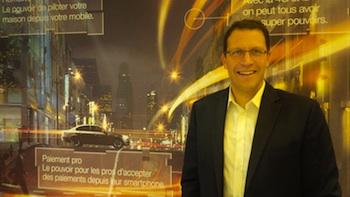 The operator will provide services including interactive navigation services, internet radio and web browsing, as well as remote diagnostics and over-the-air updates of M2M software to Tesla Model S vehicles in France.

European Communications caught up with Samuel Loyson, Head of Connected Cars at Orange, during the Paris Motor Show on Friday.

Eurocomms.com: How does the Tesla deal compare with an existing deal you have signed with Renault?

Samuel Loyson: It is quite specific in a number of areas. First, the services are much more powerful. With Renault it is a few thousands of MB per month, with Tesla it is several GB so it is 10 times more in terms of consumption.

With Renault we are single global provider, while Tesla has a country specific approach.

With Renault it took two years between signing the deal and getting the first cars delivered to the market. We signed the Tesla deal a few weeks ago and the first cars will be shipped in a few weeks. Renault is a much larger, more industrial player, while Tesla is smaller and more agile.

Will you be signing more global or country specific deals over the next few years?

The trend is to become more global but we don’t have a global solution for Tesla. But this is what we are working on with the GSMA’s Embedded SIM initiative, which enables high bandwidth usage with global unified sourcing.

We will have a global solution based on Embedded SIM to serve the Teslas of this world in the coming months.

We remain very active in France and have RFPs going out constantly so we will have some new announcements by the end of the year for sure. We will not stick with Renault only.

When would you expect that the majority of cars sold in France will be connected cars?

What I’m really convinced of is that there will be much more than just eCall in these cars. It is absurd to put mobile connectivity in a car and have eCall as the only service. The car manufacturers that we talk to agree with this.

Some like Renault and Tesla are more proactive while others are waiting to see what happens but what is certain is that they will provide more services if connectivity is built in.

The expectation from buyers is coming too.

In announcing the Tesla deal, you said that there is a huge opportunity for telcos to help car manufacturers to get to know 50 percent of their customers that they don’t know – what did you mean by this?

If you look at their business model, a lot of the margin comes from maintenance. People are generally loyal to the manufacturer’s maintenance network for the duration of the warranty period but then many swap to third party maintenance.

Some manufacturers will sell the car at cost or nearly cost price in order to sell you maintenance afterwards so it is a key strategic area.

What we believe is that with connected cars the manufacturers can increase loyalty to their own maintenance networks. They can get in touch with people that they lost and keep customers they have for longer.

What is your biggest challenge in convincing car manufacturers to choose Orange?

There is a fight on price so you have to be competitive. The telecoms industry is full of what I call multi-domestic players so for us it a challenge to get a deal with local manufacturers in countries where we are not a local player. We are more relevant for France and global players that want a more uniform presence across Europe.

We need to move forward with Embedded SIM, which is very important for the industry. We must demonstrate that we are on time with the initiative.

Finally, we need to go beyond connectivity. Connectivity is an enabler for services but we want to support the car manufacturers with value creation. I think we now have the enabler via cheap connectivity in Europe, very powerful connectivity management platforms and different business models.

The biggest challenge here is how can we support the manufacturer in designing the relevant service proposition for end users.

Orange in new product blitzkrieg as it bets on connected future

The claim that connectivity is a commodity has existed in the mobile industry for some time and has recently extended itself to the Internet of Things. More detail
Telcos bet on eSports to get down with the kids

In some circles, attempting to shrug off the image of being a bunch of crusty old network engineers by buying an eSports team would be regarded as the very definition of having a midlife crisis. More detail
Deutsche Telekom’s Head of Europe rails against “really dangerous” regulatory mindset

Complaining about the regulatory landscape has been de rigueur in European telecoms for many a long year. More detail

No more new content is being published on this site -
for the latest news and features, please go to:
www.mobileeurope.co.uk

Other Categories in Features